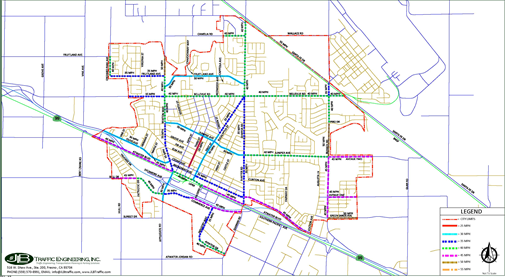 Engineering and traffic surveys were completed for 52 roadway segments consisting of radar speed surveys, daily traffic counts, collision data and an analysis of roadway conditions. The purpose of these surveys was to recommend the speed limits appropriate for enforcement and to provide any recommended speed limit changes in accordance with current State of California regulations and guidelines. Speed limits were established at, or near, the 85th percentile speed primarily to protect the public from the unreasonable behavior of reckless, unreliable, or dangerous drivers.

The 85th percentile speed, also referred to as the critical speed, is defined as the speed at or below which 85 percent of traffic is moving in free flow conditions. Speed limits established on this basis conform to the consensus of those who drive on the roadways as to what speed is reasonable and safe under normal driving conditions. The current standard, as described in the CA MUTCD is to consider the speed limit at
the nearest five miles per hour (mph) increment of the critical speed; however, a reduction of five mph is allowable to meet the needs of the community if justification is provided in accordance with the CVC through an engineering and traffic survey. Significant factors in determining reasonable and safe speed limits that are most appropriate to facilitate the orderly movement of traffic include prevailing speeds, collision rates, unexpected roadway conditions and adjacent land uses including residential and commercial densities.