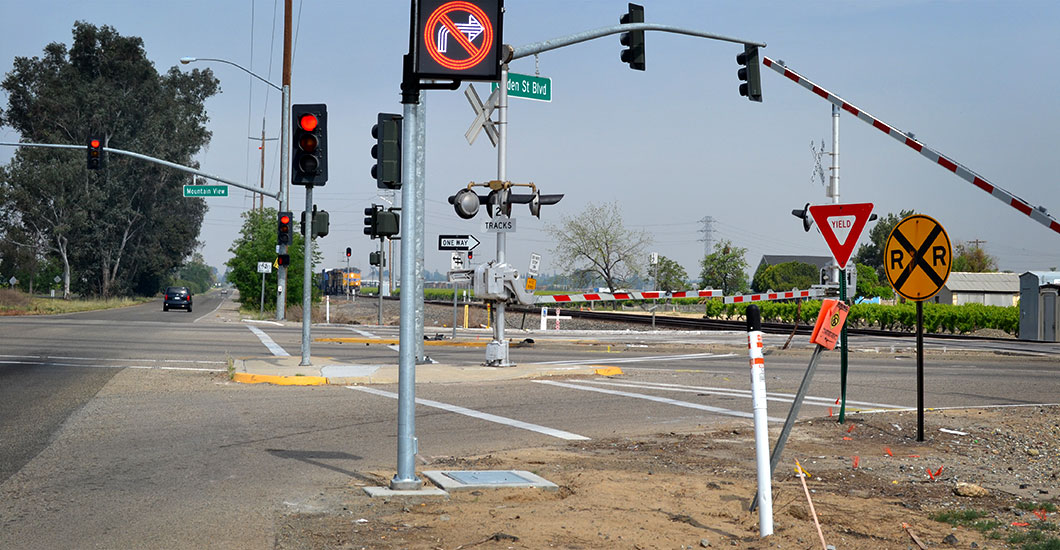 While with another consulting firm, Mr. Jose Luis Benavides, P.E. was the project manager and traffic engineer of record who prepared plans and specifications to improve the safety of the Mountain View Avenue and Union Pacific Railroad (UPRR) at-grade crossing. The preparation of plans and specifications to improve the at-grade railway crossing included the preparation of traffic signal modifications, a pre-signal, signing and striping, railroad pre-emption timing, utility coordination and coordination with the California Public Utilities Commission (CPUC), Caltrans Rails, and the UPRR. This project was funded by the Section 130 At-Grade Railroad Crossing Improvement Program.

It was important that the new pre-signal equipment did not conflict with existing UPRR equipment and that it did not block the visibility of any of the UPRR signal heads from the stopping sight distance point down to the stopping limit line. To accomplish this, a modified traffic signal pole and mast arm were utilized, and its specific location was determined in the field during the design. Also, a no right turn on red blank out sign was installed so that drivers heading northbound on Golden State Boulevard would be informed not to make a right turn onto eastbound Mountain View Avenue during railroad pre-emption.

The project’s scope of work included the following: